Through my job as a UX Designer, I have experienced that, we create the best designs, when we collaborate with the project team by using prototypes.

The prototype functions is a preliminary version of the digital product, we are designing. It is used to develop, demonstrate and experiment with ideas in the design process. Also, it is brilliant for testing relevant functions and usability of the design on the users.

As UX designers we often emphasize the importance of involving the users during the design process – and prototypes are truly great for that. But prototypes also have another purpose, which is rarely mentioned: They are very good for matching expectations with your customer!

I see 3 main advantages of working with prototypes:

The prototype is a great tool for communicating ideas and designs and to visualize the final solution for the customers. Using detailed functional prototypes, we are able to show the customers exactly how things will work. Thus, it becomes easier for them to understand every interactive, functional and visual element of the solution.

We always start by walking through the prototype with the project team. Afterwards, the customer gets a link to the prototype. This means they can explore and click through the pages and functions themselves, and get the same experience as the users. When the project team have experienced how the solution works, this often results in very constructive feedback and relevant questions. Thus, it becomes easier to agree on the final design.

Using prototypes for collaboration eliminates misunderstandings between designers and the project team, and by making sure that everyone takes part in the process, we avoid bad surprises when the solution is finally implemented.

Writing requirement specifications is not an easy practice, so how do we avoid that usability and design drowns in technical details and functional descriptions? This is where the prototype comes in, as the ‘interactive requirements specification’.

Rather than describing every little interaction and element with words, an interactive prototype visualizes all the details and shows how it should work.

For the developers, it becomes easy to see exactly what needs to be done. The prototype demonstrates the different usage scenarios and interactions, giving developers a complete picture of the final solution. Instead of just reading requirement specifications, they now have a functional version of the solution design right in from of them.

Developers and designers do tend to misunderstand each other – even with good intentions on both sides. With a prototype we can speak the same language.

3. From the project team to the rest of the organization

Replacing the requirements specification with a prototype also makes it easier to share and not the least present the final solution with other departments and stakeholders in the company. Rather than asking people to read a 50 page text document, they can now use an interactive prototype. This allows others within the organization to get a clear idea of the design content and the experience of using it. This means there is a greater chance of getting some feedback from other people in the company as well.

Calculating Return on investment for UX

When I started working in the field of UX and usability, the... 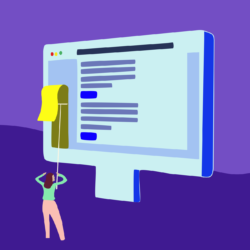 Why work tools should be designed differently

I must admit that some of my favorite projects are those where...

6 challenges when designing for work

I recently gave a talk at about "designing for work". This made...
SEE ALL ARTICLES
This website uses cookies. Read more